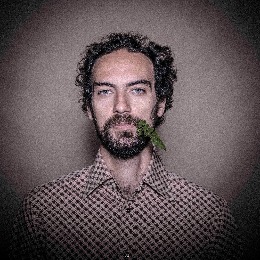 Son of a pastor from Ipanema, João Selva grew up in Rio de Janeiro in a community of former prisoners and converted artists. In his childhood, he played his first notes on a guitar under the watchful eye of Wanda Sá – one of Bossa Nova’s iconic figures. The influence of his father, a music lover and collector of records of all sorts, led him to further his knowledge of Brazilian music, specializing in the practice of Capoeira Angola, Samba de Roda, Maracatu or Coco de Roda. At the age of 18, he began a career as a travelling artist playing music hall shows for children in Africa, South ... America and the Carribbean – before settling down in the city of Lyon, many years later.

As a notorious ambassador of Brazilian music in France, he made his debuts with the Forró de Rebeca trio, touring many prestigious venues in France. Simultaneously, he joined forces with American producer Maga Bo, Diplo's collaborator and precursor of the "Tropical Bass", to create the Sociedade Recreativa project, an explosive mix of electronic music and traditional Brazilian rhythms. This will result in several international tours, two albums that were critically acclaimed in the media (Songlines, Télérama, Les Inrocks, ...) as well as a wide broadcast by DJs and radio stations (BBC, Nova, FIP, RFI, ...).

After collaborating with many artists - from Massilia Sound System’s Papet J to his fellow countrywoman Flavia Coelho, as well as Sir Jean and DJ TUDO, his decisive meeting with the prolific producer Bruno Patchworks led him to launch his solo career. They met by chance at a jam session in les Pentes de la Croix Rousse1 in the spring of 2016. The two began a fruitful collaboration which first started with the single "Vida Maravilha" - synchronized as part of an ad campaign for Citroën, and then continued with the release of the album "Natureza" in 2017 by Favorite Recordings: a dive into the Tropicalist Pop of the 70s that mixes samba, soul and vintage funk.

In 2021, João Selva returns with a second album, a true hymn to creoleness and tropicalism, embued with flavors of funk, jazz and disco. An exhuberant travelogue diary featuring some shiny souls such as the sprightly Flavia Coelho and the multi-instrumentalist producer Patchworks (Voilaaa, The Dynamics, David Walters, Mr President, Taggy Matcher). Cast off on a thrilling musical cruise with this Brazilian nomadic spirit, sailing freely on the mythical Black Atlantic.

Your message has successfully been sent to JOAO SELVA